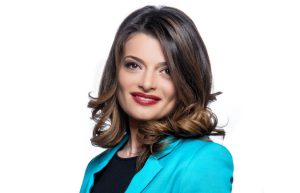 In 2005, Tskriala Shermadini graduated from the department of international and online journalism at Ilia Chavchavadze State University of Language and Culture. Between 2007 and 2009, she was a student at the GIPA School of Media Management.

In 2013, she became a Bursar Program winner and attended the CIJ investigative journalism summer school in London.

In 2009, she worked for the Association of Investigative Journalists as a correspondent. In 2010, she joined Studio Monitor as a reporter.